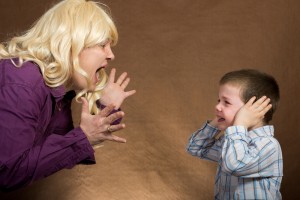 At what age do children recognize and react to anger? Your little toddler may seem adorably clueless about many things, but in reality toddlers are very aware of their surroundings. Screaming and yelling has an impact on adults, and one recent study proves it also affects children. In this blog we take a look at this recent study, examining how this information can help us all become even better parents.

University of Washington Study Finds Children Impacted By Yelling—But How?

The University of Washington’s Institute for Learning and Brain Sciences recently posted a video online showing a rather interesting experiment about yelling and the impact it has on small children. Researchers strived to determine what a child would do after witnessing an adult get angry about noise a certain set of beads made.

The children were all perched upon his or her parent’s knee while the experiment unfolded. One researcher would explain how to play with the beads, while another researcher pretended to get very annoyed, throwing their arms about and making a fuss. Then, the child subject would be prompted to play with these same beads. Sometimes the angry researcher remained in the room, and other times they left.

One little boy participating in the study was 15-month Adrien. It was clear to everyone that Adrien really wanted to play with the beads, but after watching the adult get angry, he decided against it. Many describe his timid hesitancy as “cute”, but it is also very telling. It proves children as young as 15-months can identify anger and will work to prevent it. This also indicates that toddlers have the ability to analyze their environment and make choices based upon the cues they receive from the people around them.

Dr. Andrew Meltzoff is the co-director of the institute responsible for this study. He wrote in an email to the Huffington Post, “They (toddlers) can monitor what you do, and think about, plan, and regulate their own actions accordingly. The interesting thing is that they can do all this without the help of language. They were only 15-months old, too young to speak in sentences.” (Read More)

Of course, one child is not enough for sufficient evidence, and so researchers continued their experiment with 149 toddlers around the same age as Adrien. The only variations the researchers applied throughout the experiment was the positioning of the angry adult, in some cases the adult was facing the child, in other cases they were facing partially or fully away.

If the angry researcher left the room, children were quick to pick up the beads and start playing. But if the easily irritated researcher returned, either watching the child directly or reading a magazine with a neutral face, children hesitated up to 4 seconds before mimicking what the demonstrator showed them to do with the beads.

Researchers found that if the adult was directly facing the child at the time of the outburst, they were far less likely to touch the beads, and if they did it took them much longer to do so.

Let it be known that none of the anger was directed at the children; instead another adult was clearly the one being scolded. Researchers say that the context and style of the anger used in the study is no different than what many children witness throughout a normal day.

Should You Yell At Your Kids?

The University of Washington study proves children are sensitive to anger, which leads to the question—should parents yell at their toddlers ever? We get it, sometimes it’s hard not to raise your voice in a particularly frustrating situation, and toddlers sure know how to be frustrating! Yet the next time you are feeling the urge to yell out, keep in mind the future wellbeing of your precious little one. After all, the meaning of discipline is education, not yelling.

Another project from the University of Pittsburgh researched the effects of yelling by tracking 967 middle-school kids over a period of 2-years. They found that, “…harsh verbal discipline can be as harmful to kids as hitting or spanking.” Researchers from this study also concluded on a number of other things, including:

As if being a parent isn’t hard enough already, now you have to work on always remaining calm, and never raising your voice. Parents are only human but keeping all of this in mind might help you keep calm the next time your child makes you want to fly off the handle.

4 Tips To Help You Stop Yelling

Parenting coach, Meghan Leahy, told the Washington Post that yelling only does one of two things, it produces children that yell, or it creates shameful feelings.

Yelling is often a natural reaction when something is upsetting or irritating, no matter how old you are. But kids are hardened by yelling, it can make them feel distrustful and can push them away from you. Not to mention, it makes them more likely to use yelling as a coping mechanism the next time they get upset. Therefore, the best thing you can do is transform your home into a yell-free zone. Easier said than done, but here are 4 tips to help.

1. Openly tell your kids that you are making an effort to stop yelling since yelling is not productive. Yet, even adults make mistakes and so tell your kids it’s okay to politely call you out if you get caught yelling.

2. The moment you get the urge to yell remind yourself to set a good example. You don’t want your child running around yelling at everyone and so it’s important to micro-manage your own emotions in order to set a positive example.

3. Give yourself “me” time. No matter what it takes you have to give yourself the same attention you reserve for everyone else. Otherwise, you naturally build up with frustration and it’s only a matter of time before you get overly angry and yell.

4. If you feel yourself getting too angry, you might need a moment to walk away and collect yourself so that the conversation goes in a more positive, and less angry, direction.

Read more on why yelling is bad